5 Types of Ticks in Pennsylvania (With Pictures) 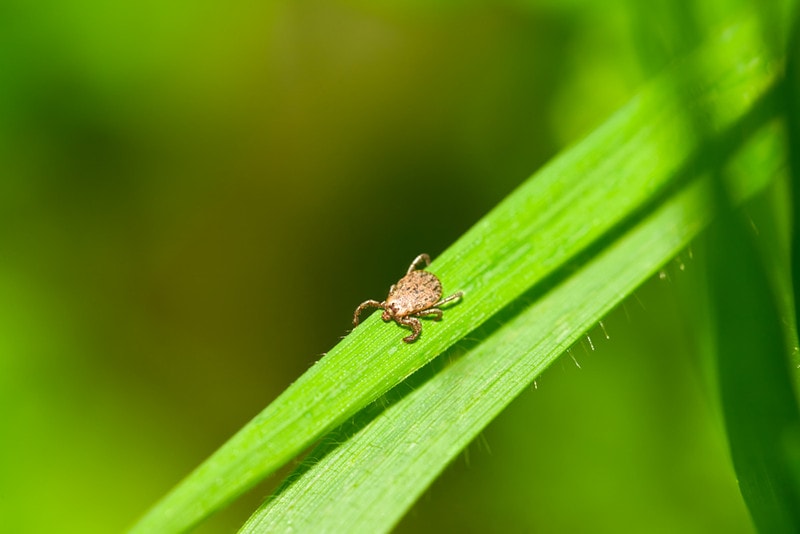 Ticks can pose a serious health risk to your pets and to you. They can transmit Lyme disease and other harmful bacteria. They can also be frightening and hard to remove, especially if you don’t know what you are doing. If you spend a great deal of time outdoors, it can be helpful to know what kind of ticks are in your area. Keep reading as we list the different kinds of ticks that you might see in Pennsylvania.

The 5 Types of Ticks in Pennsylvania

The American dog tick is the most common tick in Pennsylvania, and despite its name, it will feed off a large number of animals besides dogs, including cats, raccoons, rabbits, and rats. It has a brown body, and you will usually find it along walkways and trails with plenty of grass and little to no tree cover. It can spread Lyme disease and Rocky Mountain Spotted fever, so it’s best to avoid it when possible.

The black-legged tick is common throughout Pennsylvania and one of the leading transmitters of Lyme disease. These ticks are active any time the temperature is above freezing and will choose targets based on their stage in life. Young ticks will choose small animals, while adults will choose large ones.

The lone star tick is called the tick of the south by many people because it’s quite common in the warmer states. However, it has been slowly moving north, and you can find it in many counties in southern Pennsylvania, especially in urban environments. They are more active during warmer weather. They are aggressive toward large and small animals, including humans, and will even chase after a desirable target.

As the name suggests, the groundhog tick prefers the groundhog as its host, but it will also feed off birds, other small animals, and people. It can transmit the Powassan disease, a rare illness similar to the West Nile virus, and there’s no vaccine or anti-viral drug available to help fight it. The disease is currently on the rise, with many sufferers requiring hospitalization.

The Asian longhorned tick is currently the rarest variety on this list. However, it’s an invasive species, and its numbers are climbing, so it is likely to become more common. It has a light-brown body with unusually long horns, so it isn’t hard to identify if you see one. It chooses its host based on its stage of life, with adult ticks choosing large prey. The Asian long-horned tick also spreads the Powassan virus, making it especially dangerous.

Rocky Mountain Spotted Fever is one of the most common diseases that ticks transmit and often comes from the dog tick. The disease can affect pets or people, and symptoms usually begin 2–14 days after exposure. Fortunately, the tick needs to be attached to the body for 6 hours to transmit the disease, so always ensure that you look over yourself and your pets after you spend time outside

Black-legged ticks commonly transmit Lyme disease, as does the lone star tick. The first symptom is usually an uncomfortable rash around the bite, and more symptoms will follow, including numbness in the hands and legs, fever, chills, and headache. Symptoms usually appear in a few days but can take up to 3 months.

Tularemia is a common disease spread by ticks that many people call rabbit fever, and the dog tick, lone star tick, and others can spread it. Victims will usually suffer an ulcer at the bite site, and other symptoms include fever, loss of appetite, and swollen lymph nodes. Seeking out medical treatment can help reduce the risk of fatality.

How Can I Avoid Tick Bites?

Luckily, there are only five kinds of ticks in Pennsylvania, but their large populations mean that many people and animals are susceptible to bites, which can spread one or more infectious diseases. Always inspect your pets carefully after a walk, and remove any ticks that you find. Remove your clothing, and throw it in the dryer before taking a quick shower to inspect and remove any ticks on your body.

For many years, common knowledge held that chemicals used in pressure treated wood can leak into the soil making the plants toxic. Inititally, the chemicals

Visnja Radosavljevic
How to

How to Replace a Window Sill in 6 Steps