What Is the State Flower of West Virginia? How Was It Decided? 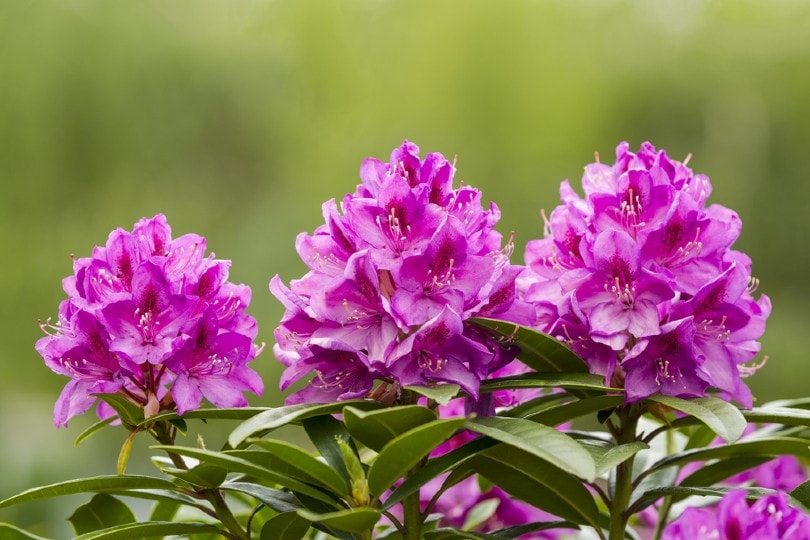 West Virginia was among the first state to designate a state flower, the rhododendron (Rhododendron maximum). Rhododendrons are a genus of over 1,000 species of evergreen shrubs and small trees in the heath family (Ericaceae). They’re native to warm-temperate and tropical regions worldwide.

This type of shrub grows naturally throughout West Virginia, but you can also plant it in a yard. The rhododendron was chosen because it’s native to the Appalachian Mountains, located in eastern West Virginia. Rhododendron is a symbol of West Virginia’s natural beauty and its rich history and heritage.

Origin of the State Flower of West Virginia

The word rhododendron comes from the Greek words ‘Rhodos’ meaning rose and ‘Dendron,’ meaning tree. Its origin can be traced to the Himalayas, Southeast Asia, and the mountains of New Guinea. These regions have moist acidic soil. So, rhododendrons grow well in this soil type.

Rhododendron was first introduced to England in 1736 before it came to the United States in 1809. Common names include great rhododendron (big rhododendron), American rhododendron, great laurel, and Rosebay rhododendron.

How Was the State Flower of West Virginia Decided?

After the 1893 World Columbian Exposition, eight years passed before West Virginia designated a state flower. By then, the governor was George Wesley Atkinson. When the end of his term drew close in 1901, he decided that West Virginia should have a floral emblem. He suggested that the rhododendron should be chosen as the state flower as it was beautiful and prevalent in the state.

This suggestion by the governor prompted other people in the state to join in the lobby for a floral emblem. Many flowers in the state including the rhododendron were nominated. The State Superintendent of Schools proposed that students in West Virginia should select a state flower. That was in 1902. In November of the same year, there was a state referendum.

Students voted, and many of them chose the great laurel (rhododendron). The rhododendron garnered more than 15,000 votes and beat the first and second runners-up (honeysuckle and wild rose).

Learning about the characteristics of rhododendrons helps you understand and appreciate them better. Plus, the more information you have about the state flower of West Virginia, the easier it is to take care of it.

So, let’s look at several characteristics of rhododendrons.

Rhododendrons need moist soil to grow well. Their roots do not like standing water or saturated soil, but they prefer well-drained soils. Also, they can tolerate low fertility and acidic soils.

Rhododendrons grow best in partial shade with filtered sun. These are the ideal conditions for the color development of their leaves and flowers. Direct sunlight may cause leaf scorch, especially if the plant does not get enough water during the hot summer days.

The roots of rhododendrons are fibrous and shallow, meaning they cannot get water from deep underground. They have tuberous root systems that store food reserves for long periods during unfavorable weather conditions.

Some rhododendrons have thick and short taproots. Others have thin, elongated taproots with many branches near the surface of the soil. They spread out in all directions to absorb water and nutrients from their surroundings.

Rhododendrons have healthy, leathery evergreen leaves, usually elliptical and pointed at the tip. The leaf color varies from light to dark green depending on the variety and sunlight exposure. Some rhododendrons have variegated leaves with white or cream splotches on the surface.

Rhododendrons can be short or slightly tall, depending on the variety. So those that grow high are mostly between 5 and 10 feet (two meters) tall when mature.

Usually, the blooming period for rhododendrons is late spring through early summer. But this also depends on the variety of rhododendron you have planted in your garden. They bloom for a period of between three and four weeks.

The flowers come in many colors including white, pink, yellow, red, lilac, and purple. Some types produce many petals per flower while others have one petal per flower.

Rhododendron doesn’t have many uses, but it can make natural medicines. It is a primary ingredient in the art of creating healing products.

Rhododendron has several medicinal uses. It has been used in Asia for a long time. Some rhododendron species contain compounds that can be toxic to humans if ingested in large quantities. But some species have been used traditionally as herbal remedies to treat various ailments.

The leaves of rhododendron are anti-inflammatory. They can be spread on the skin to relieve headaches and arthritic pain. The dried root is used as a diuretic. It treats gout, rheumatism, and skin conditions like eczema and psoriasis.

How to Care for Rhododendrons

Rhododendrons are easy to grow and bloom every year. Since they need little care and maintenance, they are a favorite of people who love gardening. Here are several ways you can care for rhododendrons.

Once the ground has thawed, mulch around your rhododendrons to keep them healthy and happy. It will prevent the soil from drying out during the hot summer months, which can cause the roots to rot.

The mulch should spread about two to three inches. You can use pine straw and bark for the mulch. As it decomposes, it adds acidity to the soil. Acidic soil is ideal for rhododendrons.

Rhododendrons are not heavy feeders and don’t require fertilizing more than once a year. That’s if you’re growing them in good soil that drains well and has plenty of organic matter. You won’t need to fertilize them again until spring, when new growth begins appearing.

Removing dead blossoms encourages new growth for next year’s flowers. It also prevents infection by bacteria or fungi that cause diseases such as black spot and powdery mildew disease. It’s best to remove them before they begin to fall off naturally. This way, they won’t also attract pests.

Don’t prune rhododendrons when they are blooming, but rather prune them before blooming. The plant needs all its energy to produce flowers. So, it can’t take time away from this process to heal and recover from wounds created by pruning.

Also, pruning will stop the rhododendron from flowering. The flowers are more beautiful when left to spread out into their meandering shape.

If you notice a diseased or dead branch, cut it off at the base with pruning shears. Dead branches can harbor pests and diseases, which may spread to other parts of your plant. Removing them also prevents them from falling onto other parts of the plant and causing damage to them as well.

Rhododendrons need at least one inch of water weekly during their growing season. When dormant in winter, they only need water once per month, enough to keep their roots from drying out.

If you live in a humid climate, this may not be necessary. The humidity will keep your plant damp most of the time! Remember that rhododendrons need moist soil.

Other State Symbols in West Virginia

Besides the state flower, West Virginia has many other unique and interesting symbols representing the history, culture, and heritage of the state. West Virginia is also among the states with many state symbols.

Usually, the state flowers of each state have a long and often heart-warming tale of selection. They are carefully chosen to represent the state they’re prevalent in many ways.

So there you have it, the state flower of West Virginia is the rhododendron. This beautiful shrub has been celebrated in song and praised for its beauty. So, if you drive through the state any time soon, make a point to stop by and pay some respect—or at least take a picture.

Thanks for spending some time with us. We hope you had much fun learning about the state flower of West Virginia.

10 Safest Cities in Kentucky (With Pictures)

Note: This article’s statistics come from third-party sources and do not represent the opinions of this website. Kentucky has a lower crime rate than the

When Do Cherry Trees Bloom? What You Need To Know

Who Invented the Dishwasher, and When? (History)