Does Cornmeal Kill Weeds? What You Need to Know! 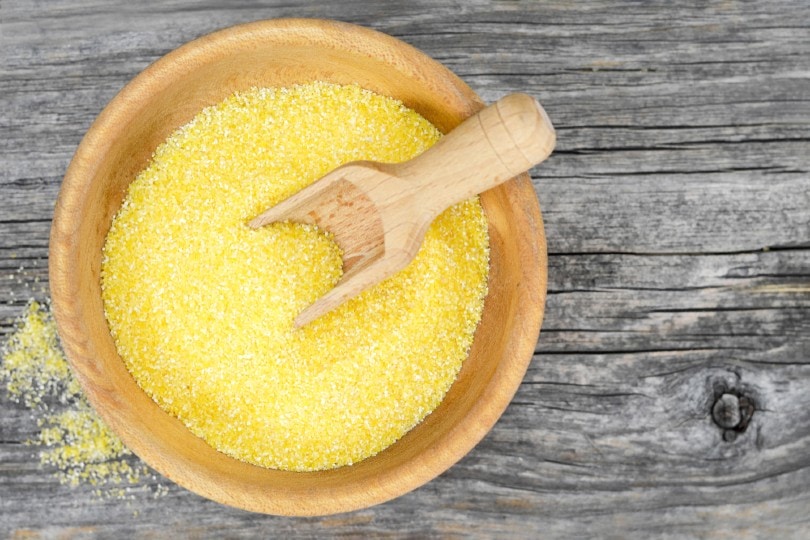 Garden weeds can be frustrating to any gardener. You spend a lot of time and resources planting beautiful healthy vegetables, but before you even have a chance to enjoy your garden, weeds pop up everywhere! So, what do you do about them?

There are many natural ways to get rid of weeds without pesticides. One popular natural remedy is cornmeal. It is made from dried corn grounded into a fine powder. Usually, it’s used in baking as a thickening agent, and you can also use it as a coating for fried foods to keep them crispy.

So, does this remedy actually work as an organic weed killer? We’ll tell you all about cornmeal and whether it kills weeds in this guide. Besides, we’ll provide a few tips for using cornmeal on weeds. Let’s jump right in.

Is Cornmeal an Effective Weed Killer?

Yes, you can use cornmeal to kill weeds, but note that this is not the common type of cornmeal that is edible. The cornmeal you use as an ingredient in cornbread and other foods is made from ground-up corn kernels, and it’s not suitable for weeds.

Instead, you’ll use corn gluten meal, a byproduct of the wet milling process of producing cornmeal. Corn gluten meal is not human food. It’s used in cattle and pet feed. Usually, it’s used as an organic method for controlling weeds and fertilizing lawns.

Corn gluten meal will kill weeds if used as a pre-emergent herbicide. You need to apply it several weeks before you plant anything in the area where you want to control weeds. It will prevent new weeds from germinating and growing. Once your plants are established, use it again for extra weed control.

So, corn gluten meal does kill weeds before they emerge from the soil. However, it isn’t effective against mature plants—it’s only effective against weed seeds. Also, note that it doesn’t kill annual growing weeds such as crabgrass, purslane, foxtail, and pigweed, and perennial weeds like plantains, quack grass, and dandelions

Corn gluten meal is high in nitrogen, oils, and proteins. The oil kills the roots and the seeds of the weeds. It works best on sunny days with no clouds blocking the Sun from reaching the ground. It is inexpensive and easy to use. Besides, it’s safe for children and pets.

How to Apply It for the Best Results

Apply the cornmeal before planting anything so that it’s not absorbed by your plants. The protein binds to soil particles and prevents weed seeds from germinating. Ensure there isn’t any water standing in your garden beds before applying it. The mixture needs contact with soil for it to work well.

When Should You Apply It?

The best time to apply corn gluten meal is when it isn’t raining. If possible, apply it in the early morning hours when it’s still cool outside. This way, it won’t absorb any moisture from the ground before you get a chance to water it later in the day.

It takes anywhere from 5–6 weeks for the cornmeal to kill weeds. That’s the period it remains active, but this depends on how much of the product you use and how long it takes to wither away.

If you’re using corn gluten meal as an organic herbicide, apply about 1 cup per square foot of soil every 3 weeks. Do this until all signs of weed growth are gone.

Fungi can cause damage to plants by attacking the leaves or stems. Also, it produces toxins that poison the plant’s roots. Cornmeal can be used as an organic pesticide to kill the fungi. It creates a physical barrier on the leaves, roots, and stems of your plants.

It also encourages the growth of useful microorganisms, which feed on pathogens that can otherwise lead to plant diseases.

Speeds Up the Composting Process

Cornmeal adds nitrogen to compost, as well as balances the air available for decomposition so that everything breaks down quicker. The more cornmeal you use in your compost, the faster it will decompose.

Gets Rid of Water Algae

You may have noticed some green patches in your water if you have a garden pond or aquarium. These are known as water algae. They can be unsightly and even dangerous if left unchecked. If you’ve tried everything else and still haven’t found a solution, sprinkle some cornmeal on the water’s surface.

The cornmeal contains cellulose, which collects the phosphorus in the pond. It also balances the water’s chemistry. These two properties kill algae in the pond water.

Alternative Natural Weed Killers to Use in Your Garden

Besides using cornmeal gluten, there are other natural methods of weed control you can use. Let’s look at each one.

Mulch can be made from different materials such as bark chips, hay, straw, leaves, and even grass clippings. When placed on the soil surface, it acts as a barrier against the sunlight that weeds need to grow. If you have an established garden, mulching can keep the weeds out.

Mulch will also prevent soil erosion around your plants and prevent water from evaporating from the soil too fast.

Boiling water is one of the most effective, fast, and easy ways to kill weeds. Simply pour boiling water on the weed and watch it shrivel up and die.

This method works best on smaller weeds that aren’t deep-rooted. If you have bigger weeds that are more deeply rooted, this method may not work. The weeds will need more time to wilt before you can pull them off the ground.

Salt is a highly effective natural weed killer. It works by dehydrating the plant, causing it to wilt and die.

The best time to use it is when the soil is damp to help it stick better. Sprinkle the salt on top of the soil around your plants or directly on the weeds themselves.

Cover crops are plants grown for their ability to protect the soil from erosion. They also prevent weeds from growing in the garden. The primary benefit of cover crops is reducing the need for chemical herbicides. You can also use some of these plants as mulch or compost material after harvesting them.

Uprooting weeds by hand is an old-fashioned method of killing weeds in your garden. Grab the base of the weed’s stem with both hands, pull, and twist slightly to break off the roots.

You can also use gardening tools to loosen the weed’s roots before pulling them out. If you have a large patch of weeds, this method may take longer than other methods.

Corn gluten meal can be an excellent way to eradicate weeds in your garden. It’s cheap, eco-friendly, and most importantly, an effective method of destroying the seeds of undesirable plants.
However, you have to use it before the weed seeds germinate because it is a pre-emergent herbicide. It does not kill already germinated weeds.

You should not worry about harming the soil’s natural environment. Corn gluten meal does not contain any harmful chemicals or toxins.

We hope this article has answered your questions about using corn gluten meal to kill weeds. Consider trying it, especially if you’ve had trouble controlling weeds in the past.

Sometimes, the simplest tools are the best. That’s the case with the Allen wrench or hex key. The design is deceptively elementary. However, this mere

10 Most Dangerous Cities in Montana