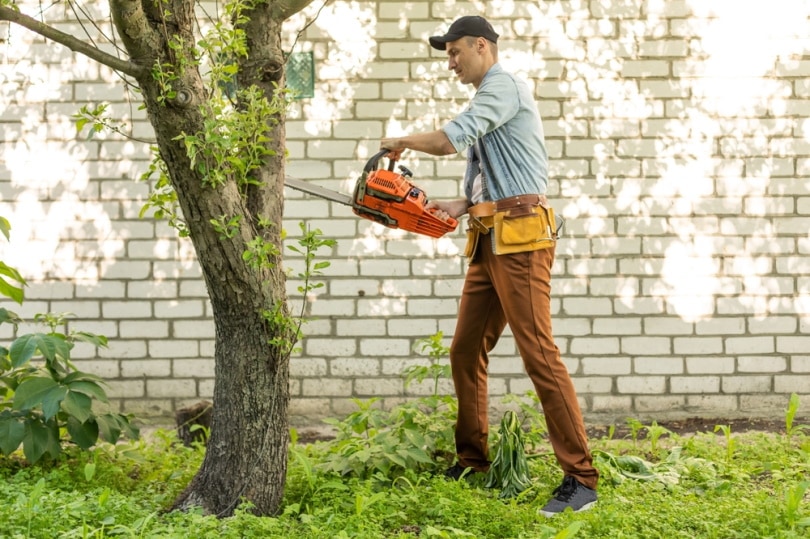 Almost all new homeowners are concerned about the specifics covered by their insurance policies. This is especially a major concern for people who live next to heavily wooded areas and are worried about the damage one of the trees would cause if they fell on their property. What if a neighbor’s tree fell on your property? You might think a simple yes or no answer would suffice, but it’s not quite that easy.

That depends. If you just want a tree removed for the heck of it, then likely not. However, “tree damage cleanup” is often built into standard homeowners insurance policies. Tree removal is covered by the homeowner’s insurance policy but has to fall under certain specific circumstances. It depends on how a tree was removed and what sort of damage the tree caused. The coverage usually includes the removal of tree debris that falls on insured structures and necessary repair and debris clean-up. Your coverage might also reimburse you to replace the fallen tree up to a specified limit if the specific peril that caused the tree to fall is covered.

However, there are situations where removing a fallen tree is the homeowner’s responsibility. This is because the costs are either too high or too low that it’s senseless to make a claim, or your insurer won’t pay for it. Either way, knowing when your insurance can cover tree removal costs and when they don’t will help you make informed decisions when selecting an insurance policy.

Generally, homeowners insurance covers the removal of fallen trees or damages resulting from the fall, only if it fell on a covered structure. When tree removal is covered, the insurer pays the policy up to certain limits to remove the tree and repair/rebuild the damaged structure. However, there are specific considerations, as seen below.

Typical insurance policies cover damages caused by named perils. These perils are events that cause damage to the home and are listed as “covered” on the policy. The common covered perils concerning tree damage include lightning, fire, smoke, and falling objects such as the weight of snow, ice, or sleet.

The perils also include vandalism and damages caused by aircraft. In most standard homeowners insurance policies, if a tree falls on your property because of these perils, insurance covers the cost of removal of the tree and debris.

2. If a Tree Falls on an Insured Structure

If a tree growing in your backyard falls on your house, insurance companies should pay for damages and tree removal. However, if the tree grows on your neighbor’s property, your insurer may try to get a hold of your neighbor’s insurance company to cater for the expenses in a process called subrogation. In such a scenario, the Insurance Information Institute (III) suggests that you might even get reimbursed for your deductible.

3. Replacement of Trees and Shrub

This is also a factor that determines whether an insurer will cover the replacement of the tree and shrubs or just tree removal. It depends on the specific wording of your policy.

Standard policies cover replacement costs of fallen trees as long as they were damaged by the named perils like fire, lightning, or vandalism. Yet, some policies exclude tree and shrub replacement if wind or water caused the fall.

So, you need to talk to your agent to confirm the details of the policy regarding the replacement costs of fallen trees.

1. If There Is No Damage to Your Covered Structures

As earlier mentioned, tree removal costs will not be covered by insurance if caused by a phenomenon not named under covered perils. It also doesn’t cover anything that does not fall into the category of covered structures on your property. If the tree or its branches harmlessly lands on your lawn, you will likely cater for the removal and cleanup costs yourself. The same applies if trees uprooted by the named perils end up on your property but do not damage a covered fixed structure.

2. If Your Tree Falls Due to Neglect

Homeowner’s insurance will only cover sudden and accidental named perils. This includes events such as windstorms, fires, and lightning storms. These perils are covered because the events are usually unexpected, and homeowners cannot properly prepare for the extensive damages caused by a healthy and mature tree falling.

However, there are specific situations where the insurer might determine the damages were preventable. An old, dying tree is less likely to be covered by an insurer because it’s the homeowner’s responsibility to take care of all the plants on their property.

Besides, dead trees are highly susceptible to catching fires in a windstorm, so the insurer argues that the problem could have been foreseen and prevented. Therefore, homeowners should strive to keep up with tree maintenance all year round.

3. If the Tree Falls as a Result of Floods, Earthquakes, or Landslides

Most homeowner insurance companies will not cover any damages caused by flooding, earthquakes, or landslides. These events are generally not considered covered perils. Instead, they require additional coverage which may be a requirement for a mortgage for homeowners living in high-risk areas. So, if a tree falls on a home during these events, your insurer will likely deny the liability claim.

4. If You Simply Want a Tree Removed Just Because

Sometimes you may want to remove a tree to create space to build some new structures in your yard, or the tree has simply become an eyesore. In such a scenario, your insurance will not cater to the costs of having the tree removed from your property. Homeowners will have to cater to the expenses through their means.

5. If Your Tree Falls on Your Neighbor’s Property

Generally, most insurance companies do not cater for tree removal expenses if a tree on your property falls naturally and damages your neighbors’ structures. However, your neighbor’s insurance may cover the claim if you cut the tree yourself or knew it was dead or rotting.

How Much Will Homeowners’ Insurance Pay for Tree Removal?

Even though tree removal is covered by most homeowners’ insurance policies, the amount covered greatly varies between insurers. They may pay a set amount, a percentage of the policy limits, or a per-tree amount. The cost insurers pay for tree removal is usually limited to 5% of the coverage on a structure. The amount could also be between $500–$1,000 per tree, depending on the specific policy purchased.

If you have many mature trees growing in your backyard, consider opting for a higher limit for the insurance that your company needs. However, you will have to pay the company’s insurance deductibles before the policy pays for tree removal. Considering the number of trees that need removal and the total cost of the endeavor, you might realize it makes better financial sense to cater to the expenses from your pocket instead of making an insurance claim.

As a property owner, you need to understand what your insurance covers. They may help you to rebuild or repair damages in case of natural disasters. Homeowners insurance may cover tree removal, but this will depend on the damage caused by the tree and what caused the tree to fall.

All things considered, you might find that it may be easier to pay out of your pocket because, after the deductible, the insurer may only pay a small sum that isn’t enough to cater for the tree removal expenses and damage repair. They may even deny your liability claim. Fortunately, you can always appeal for a denied insurance claim. But ensure you read the fine print to determine if trees should have been covered in the first place.

20 Types of Peach Trees (With Pictures)

Fruit trees of all kinds make valuable additions to any backyard garden, but few are as fulfilling as peach trees. Peaches delight on several levels,