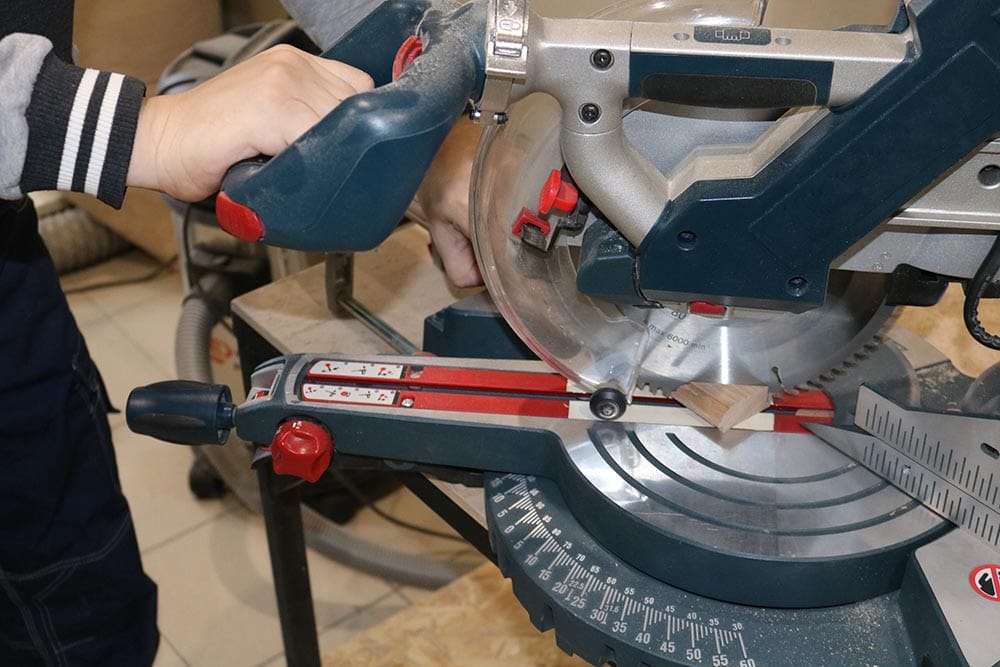 Miter Saws are one of the most common tools in use today. They might not look like much, but there is a rich history of carpentry, ingenuity, and design behind these tools. Miter saws make thousands of contractors’ lives easier every day, and they date back decades. The precursor to the miter saw came about hundreds of years ago. In fact, there is a lot to learn about these common tools.

The name miter saw comes from the type of cuts that a miter saw can make. A miter is any cut that is at a different angle from 90 degrees. The most common type of cut is a crosscut which is a simple 90-degree cut that takes something and separates it along a straight line. Miter cuts are usually done at a 45-degree angle to make two pieces that fit together to form a 90-degree angle. Miter cuts are used most often to create corners for trim, picture frames, and other similar things where two pieces of wood need to be joined to create a 90-degree angle.

The modern miter saw comes in three common sizes. The most common miter saws are 8”, 10” and 12”. Anything smaller is usually relegated to a circular saw, and anything larger is usually handled by a table saw, or band saw. A miter saw can comfortably cut through material that is half the diameter of the blade. For example, a 10” miter saw should be able to make it through a 5” piece of material.

3. 15” Miter Saws Are The Biggest On The Market

The largest miter saws available for purchase are 15”. These are seriously big saws. They are mainly used for cutting large pieces of wood like 6x6s, 4x8s, and other beams. Since 15” miters are the largest available on the market, they are hard to find, and sometimes it can be hard to find blades and pieces for them. But if you are looking for a saw that can cut through serious beams, the 15” models are the way to go.

Miter saws were initially invented to cut miters, hence the name. However, miter saws are able to make four distinct types of cuts. Miter saws can make cross cuts, bevel cuts, compound cuts, and miter cuts. This allows people to do a variety of different cuts for jobs, including trim work, flooring, posts, and more.

Most people know miter saws as power tools, but the first miter saws were manual. Miter boxes were used as guides for hand saws. A carpenter would set the miter box to the correct angle and then attach the saw. The box would guide the saw, so it made the same cut over and over again, but the sawing itself was still done entirely by hand. The most common miter angles were still 45-degrees and 90-degrees.

Craftsmen and carpenters that had to make the same cut repeatedly had to use a miter box and a lot of sweat to get the job done.

6. The Precursor To The Powered Miter Saw Was The Radial Arm Saw

Despite its age, the radial arm saw is still used today by craftsmen around the world.

7. The First Powered Miter Saw Was Invented In 1964

The powered miter saw that we all know today was invented in 1964 by Ed Niehaus. The spinning blade powered by an outlet that can be used to quickly make easy cuts did not hit the mainstream until 1970. It is crazy to think that one of the most ubiquitous tools in use today is only 60 years old. Before the invention of the powered miter saw, people used the old radial arm saws and the manual miter saw boxes.

8. The First Sliding Miter Saw Was Invented In The 1980s

One of the biggest problems with static miter saws was the fact that they could not cut through pieces of wood wider than 8”. Trying to cut a 12” piece of wood meant you had to cut once, flip the board, and cut again to make it through the rest of the board. This was inefficient and led to mistakes.

The solution to that particular problem did not come about until the 1980s, when companies began to develop new technologies. The sliding miter saw was born out of necessity and allowed you to pull the saw along a track to cut through boards up to 12” in one fluid motion. The sliding miter saw didn’t become mainstream until the 1990s, and they are still very popular today.

9. Modern Miter Saws Can Cut a Variety Of Materials

The miter saw started as a tool to cut wood, but as the technology evolved, miter saws can now be used to cut a variety of different materials. With the right blade, a miter saw can cut raw wood, pressure treated wood, engineered flooring, PVC, vinyl, metal pipes, metal straps, steel, and plastic. The power of the miter saw and the multitude of different blades available make it so that general contractors and at-home hobbyists can use miter saws to get almost any job done. From humble beginnings, the miter saw has grown to become one of the most versatile and widespread tools on the market.

Miter saws are versatile tools, but the modern incarnation of the miter saw has only been around since the 1990s. It is interesting to think that there has been a slow march through time from manual miter boxes to modern beasts that can cut through steel with the right blade. Next time you spot a miter saw whirring away on a job site, you’ll know all about where they came from and how they were developed for modern use.

What Is the Best Base for a Concrete Slab? The Surprising Answer!

The type of foundation you lay when building a home plays a huge role in the strength of the completed structure. A good foundation has