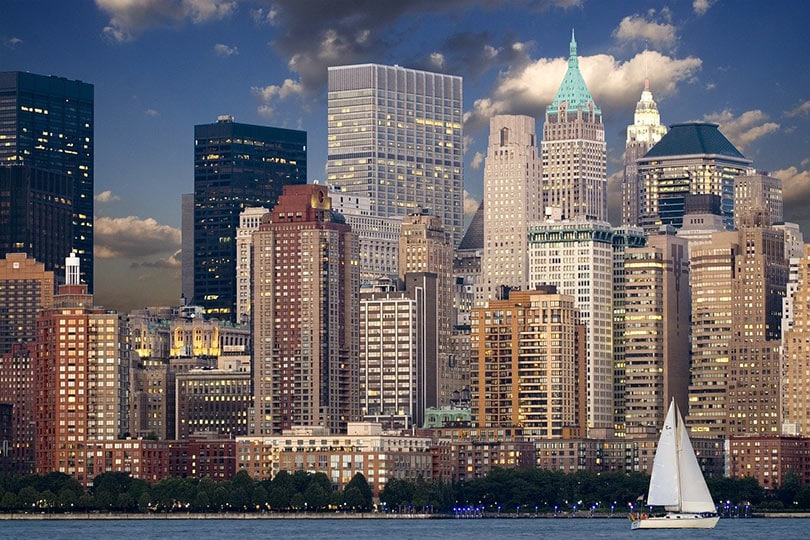 For out-of-towners, it is easy to envision a state as if it is comprised only of its largest cities and most populous areas – no case is more well-known than New York City and New York State. For that reason, it’s easy (but incorrect) to assume that the crime in the city itself is common all throughout the state, or even common in every part of New York City itself. This list gives the ten best examples of parts of New York State or New York City that are populous and near tourist areas with low violent crime, and a little about each city or area. We screened out cities and neighborhoods with populations less than 50,000 and are listing crime rates as crimes committed per 1,000 residents. All crime metrics were sourced directly or computed from the Department of Justice dataset for 2019, the latest available at the time of writing.

The Top 10 Safest Cities in New York: A Quick Look

The Town of Southampton is part of The Hamptons in New York along with East Hampton.  It is a well-known destination for the ultra-wealthy and contains Southampton Village, where many of the billionaires living in the Hamptons have homes. It is a relatively wealthy community with a median family income of $65,144. Violent crime rates are low and have stayed low for years. The area is well-ordered and violent crime is virtually nonexistent.

The Town of Clarkstown is a well-to-do area directly north of New York City along the Hudson River. The town has a median family income of $104,909 and while less focused on entertainment and pleasure than the Hamptons, it is wealthy, well-organized, and provides a stable and safe environment for the inhabitants. Violent crime rates have been relatively stable over the past ten years (exceedingly low), trending down over time.

Colonie is the most well-inhabited suburb of Albany, New York. Colonie is a primarily residential area, and local businesses are focused on serving the needs of these residents. Colonie Center is one of Albany’s large malls, providing an aesthetically pleasing and multivariate shopping experience. Violent crime in Colonie verges on nonexistent. It is an affluent and ordered area. Historical data indicate that violent crime has been low for the past several years and is trending down over time.

Ramapo is an independent township located just an hour’s drive north of New York City. Like Colonie Town, it is primarily residential, boasting a large sports complex/arena complete with indoor and outdoor fitness facilities. Violent crime rates in the town are very low, with crime maps showing general low incidence of violent crime throughout the area. Historically, the violent crime rate has been low and has remained low, with little change over the past several years.

Tonawanda Town is about half the size of Ramapo. It is directly next to Buffalo to the south and borders Ontario on the southwest. One of the town’s best-known landmarks is a Grumman F9F-6P Cougar fighter on display at the Town of Tonawanda Veteran’s Memorial. Wolf Blitzer, the famous CNN reporter, graduated from Kenmore West highschool in the area. Violent crime in the area is very low, although as one leaves the town toward Kenmore and Buffalo in the south violent crime increases dramatically. Violent crime in Tonawanda proper is centered near the Niagara riverfront.

New Rochelle was named after the city of La Rochelle in France by the French Protestants that founded it, fleeing religious persecution in France in the 1600’s. It is home to many historic sites, including Leland Castle (originally built by a wealthy entrepreneur and now used as an art museum open to the public) and the Thomas Paine Historical Site, set at Thomas Paine’s country home and serving as the library and museum of the Thomas Pain National Historical Association. Violent crime has been remarkably low for many years in New Rochelle and has fallen over the past few years. Violent crime rate increases moving southwest toward New York City.

Amherst Town is the most populous town in New York State outside New York City, and the largest on our list by some tens of thousands of people. It is directly adjacent to and was once part of Buffalo. The city has been ranked as the safest in America several times in the past couple decades, including in 1996-1998, 2001-2003, and 2010. Despite the low rate of violent crime, the rate has slowly been rising over the past several years, from 119 violent crimes in 2010 to 141 in 2019. Crime mapping reflects the city’s reputation for safety, with very little to no violent crime shown anywhere in or directly near the town.

Previously known as Northampton, the name Greece was chosen to honor the struggle of Greece for independence from the Ottoman Empire. The town is good-sized compared to the rest on our list, and while very low in crime has seen a slow climb over the past several years, from 119 violent crimes in 2010 to 167 in 2019. Crime mapping indicates that violent crimes are associated with nearness to Rochester to the southeast. The western, more rural areas are less associated with violent crimes.

Cheektowaga is a suburb of Buffalo, New York State. It is made up of the village of Sloan and half the village of Depew and contains multiple universities and galleries. Violent crime in Cheektowaga is low compared to national statistics, but relatively high compared to our other cities. Crime mapping indicates violent crimes are more likely to occur to the west as you approach Buffalo or to the northeast near the Buffalo Niagara International Airport.

Hempstead Village is a smaller community contained within the Town of Hempstead, New York State. It has the highest population density of any village in New York State, squeezing a population of over 55,000 in a space of less than 3.7 square miles. Hempstead was a community of British sympathizers during the War for American Independence and was important for the British war effort. It continued to remain important as a center of religious, educational, and production of both necessities and luxuries. Violent crime is higher here than in the other cities on our list, with five time the amount of violent crime per capita as most. Violent crime also increases to the northeast as you approach East Garden City.

How to Stay Safe in New York State

Staying safe in any strange place can be hard for travelers or those just moving into an area. These communities are known for being safer than most, but it is still the traveler’s responsibility to ensure they take responsibility for their safety as much as they can. Research the area you are staying before you go — know where your hotel or new home is. Know where police stations are and use crime mapping services like Crimegrades to try and get an idea of where high crime areas might be. Know who to call if something does happen. Get the local phone numbers for emergency departments.

Dress inconspicuously, not like a tourist on vacation. Be sure of your destinations and go directly there from where you’re staying and return by a similarly direct route. Avoid any areas or people that look suspicious, and make sure your friends and family expect you to check by certain times. If you don’t and they can’t reach you, make sure they know where you were planning to be and when and that they have contact information for local authorities.

When we hear “New York”, it’s easy to think just of New York City—and when we think of crime, we think of crime. After all, Marvel superhero Spider-Man’s hometown is in Queens. But New York State is large, and many cities are remarkably safe. Amherst has won numerous awards in the past 20 years for being the safest or one of the safest cities of its size in the United States. Whether traveling or considering a move to one of these areas, pay attention to the neighborhood—it may be safer than popular belief would have us think!

Why Is My Airbag Light On? 5 Likely Reasons

Your vehicle’s airbag is one of the most important safety features it has. Besides the seatbelt, there’s no safety device on your vehicle as responsible

21 Free DIY Bookshelf Plans You Can Build Today (with Pictures)