What Is the State Tree of Nevada? How Was It Decided? 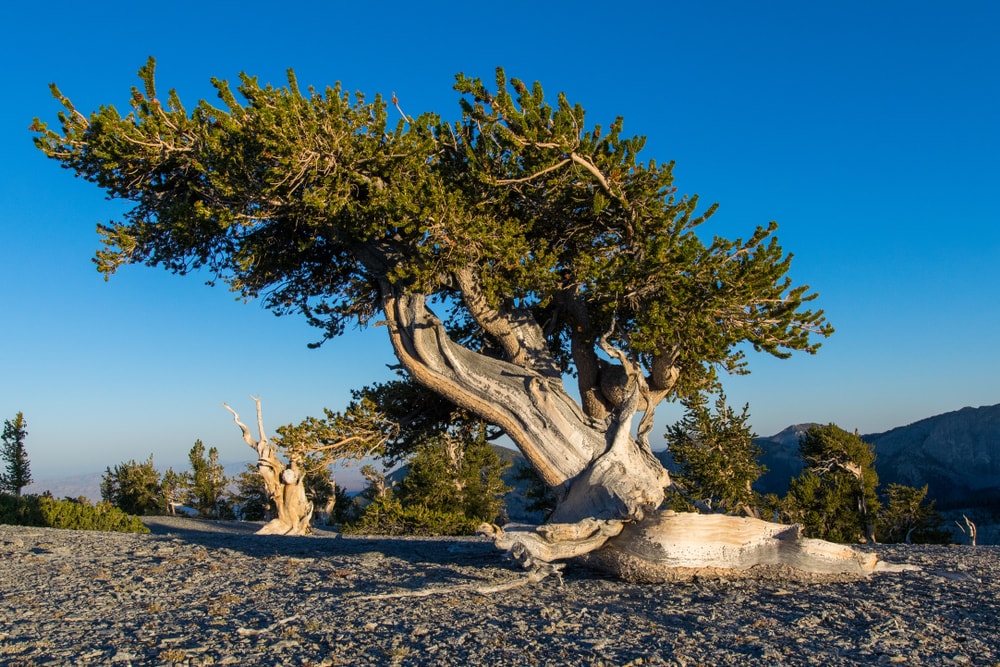 Interestingly enough, Nevada has two state trees. Only two states in America have two state trees: Nevada and California. The official state trees of Nevada are the bristlecone pine and the single-leaf pinyon tree. These trees are native to the northwestern parts of Nevada. They make up a large percentage of the state’s forestlands.

These trees thrive in the high altitude and dry climate of Nevada. Besides, the bristlecone pine is one of the oldest living trees on Earth. It has an average lifespan of between 4,000–6,000 years! On the flip side, the single-leaf pinyon is a deciduous tree that grows up to 8 feet tall. It has a shallow root system that allows it to grow in harsh desert conditions where other trees would not survive.

Nevada is often described as a desert state, which explains why trees are scarce. However, the bristlecone pine and the single-leaf pinyon are the most prominent state trees of Nevada. We’ll discuss several characteristics and uses of each tree in this handy article. Also, we’ll look at how these two trees became the state trees of Nevada. So, keep reading to learn more!

Characteristics of the State Trees of Nevada

Nevada is home to a few unique trees, among them being its two state trees. The single-leaf pinyon and the bristlecone pine tree are considered rare gems in the state’s forests. These trees have different traits, but both serve their purpose as prominent landmarks in the desert landscape of Nevada.

Let’s look at several characteristics of the state trees of Nevada. With this, you’ll understand and appreciate them better.

The bristlecone pine (Pinus aristata) is a species of evergreen conifer. It’s endemic to the ranges of the southwestern United States and the Rocky Mountains. Usually, you can find these trees at altitudes of 5,500 feet (1,700 meters). Among all the conifers worldwide, the bristlecone pine has the longest lifespan.

The name bristlecone comes from its needle-like cones, which resemble bristles. It also refers to the needles’ tough nature, which allows them to grow under harsh conditions. Its characteristics are as follows:

The single-leaf pinyon tree (Pinus monophylla) is native to the desert regions of the southwestern United States. It can be found in the Great Basin, Arizona, Nevada, Utah, and New Mexico. This tree is also native to the ranges of eastern and southern California and southeastern Idaho.

Below are some of its notable characteristics:

How Were the State Trees Of Nevada Decided?

The single-leaf pinyon was the first tree to be adopted as the Nevada state tree. It became the official state tree of Nevada in 1953. Native Americans harvested pinyon tree nuts. They also picked pinyon tree nuts that fell on the ground. Pine nuts come from pinecones. Usually, they would eat them raw or roasted.

The second tree to be adopted as the state tree of Nevada was the bristlecone pine. It became the official state tree in 1987. The Nevada legislature chose the tree because it’s the oldest tree in Nevada and has been native to the state for more than 4,000 years. The tree represented the state in the National Grove of State Trees.

The two trees were chosen not only because of their prevalence in the state but also because each had striking characteristics that differentiated them from other pines.

Uses of the Bristlecone Pine and Single-Leaf Pinyon

State trees hold sentimental value, and they are a crucial part of a state’s history. But they’re also more than that. They are also helpful economically and culturally. So, it’s crucial to discuss the uses of the state trees of Nevada. Here are several uses:

You can extract turpentine from the resin of all pine trees. It’s diuretic and antiseptic. Also, it’s helpful as you can use it to treat bladder and kidney problems.

The resin from the tree is also applied externally to relieve pain from damaged tissue such as burns or skin wounds. The pitch obtained from the resin can be used as a wood preservative or for waterproofing.

You can use bristlecone pine as firewood. The wood burns hot and fast, making it great for use as fuel in fireplaces or wood stoves. Little ash is left behind when burned, making it an excellent choice for campfires as well.

Single-leaf pinyon is one of the most widely used pine species worldwide. The tree provides excellent shade to hikers, campers, and other outdoor enthusiasts.

Pinyon nuts are edible, although some people may experience an allergic reaction from eating them. The nuts are also used to make pinole. It’s ground into flour for making tortillas and other foods.

For many people, the decision on a state’s tree is weighed down a great deal by politics, economics, and other environmental factors. In the end, some trees are hard to beat for their beauty and usefulness.

So, now you know when and how Nevada chose its state trees, the bristlecone pine and single-leaf pinyon, to represent the state well. No other state has such a diverse range of trees as Nevada, and it’s great that these magnificent trees represent the area.

What is the Best Time of Year to Replace a Roof?

How to Replace a Rear Windshield Wiper in 4 Simple Steps

6 Types of Tangerines: An Overview (With Pictures)