How Long Can You Drive on a Spare Tire? 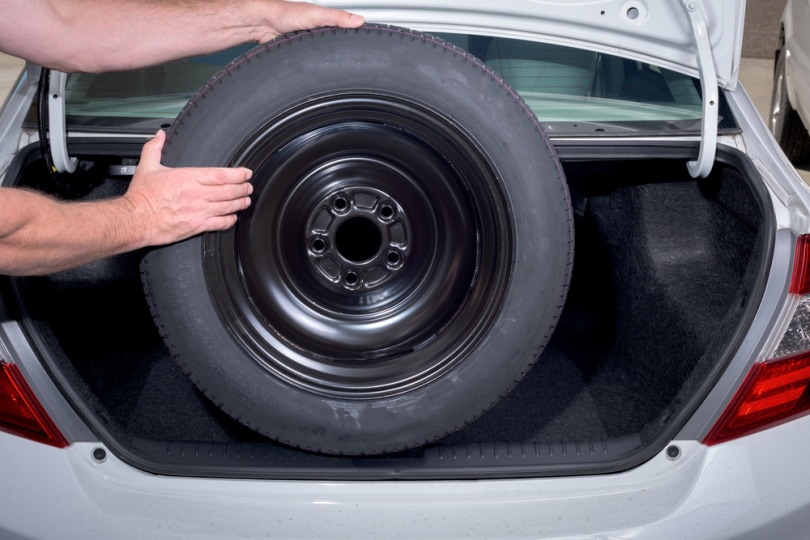 What do you do when one of the tires gives up on you in the middle of the road? You replace it with a spare, of course! But how long can you drive around on a spare tire, exactly? If it’s a space-saver tire, then the answer is 50–70 miles and at a speed that doesn’t go over 50mph. But if it’s a full-size spare tire, it will serve you for up to 5 years.

So, what is a spare tire, anyway? What sets it apart from donut/space saver? What are the most common symptoms of a failing spare tire? How much for a replacement? These are just some of the questions that we’ll cover in today’s guide. Alright, let’s talk about tires!

What is a Spare Tire? The Definition

The first thing to know is that a spare tire is actually a wheel and a tire, not just the rubber. You won’t have to spend hours trying to remove the tire from the wheel and install the spare one. Second, spare tires are designed and built for long commutes. In contrast to donuts (we’ll cover them next), they have a very decent lifespan and run very smoothly.

With that said, if you want to retain the factory ride quality and handling, the spare needs to have the same tread pattern and dimension. And if it comes from the same manufacturer and belongs to the same series, that’s even better. Therefore, if the car is equipped with a set of OEM tires (not the factory ones), the spare needs to be changed as well to match them.

These terms are often used interchangeably, but they’re NOT the same thing. Depending on what kind of vehicle you’re driving, it will either be equipped with a more reliable spare tire or a doughnut. A spare tire fits the primary tires in size, while a donut is significantly smaller (the tire, not the wheel). Besides, donuts are lighter and come with thinner treads. That means they’re not nearly as sturdy or resilient as the stock ones.

This is why you should drive slower and more carefully so that you don’t blow up the tire. Otherwise, it will go flat, and you’ll be all out of options. In any case, donuts only last for 50 miles—70 if you’re lucky. Furthermore, these tires greatly affect the overall performance of the vehicle: the braking power and handling will be compromised—keep this in mind!

Why Use a Donut Tire Anyway?

Also known as limited use, temporary, space-saving, or compact tires, donuts are much cheaper, lightweight, and take less space. On average, they are 15 pounds lighter than spare tires, and that’s quite a big difference. There is one big downside to donuts, though, and that’s the speed limit. Because of it, you won’t be able to drive on a highway.

Is It Dangerous to Drive On a Spare Tire?

No, there’s nothing to worry about here. Still, what can you do to make driving on a spare as safe as possible? Always include it in your tire rotation routine. This way, it will always have the right tire pressure and won’t cause any leaning or shaking even on challenging off-road terrain. On top of that, a well-rotated spare tire will wear the same as the main tires, which is also a big pro.

If it’s a donut, make sure NOT to put it on a drivetrain axle, because that will have a serious negative effect on the drivetrain, making the vehicle even harder to handle. Thus, unless you want to damage the differential and end up paying for the repairs, always put the donut on a non-drive axle. The transmission will be at the risk of being damaged as well.

Also, please remember that because of the more compact size, a donut makes it impossible to use advanced systems like traction control and electronic stability control properly. We highly recommend disabling both until you get to the shop and replace the tire. But as long as you don’t violate the 50–70 miles/50mph law, you should be good.

Alright, so, the big question here is—how long can you expect a full-size spare tire to serve for? This greatly depends on the brand and how well you take care of the spare. The roads, your driving habits, and even the weather/climate matter as well. On average, spare emergency tires last for 7–10 years. But once you replace one of the stock tires with a spare and use it as your primary, it will only serve for 4–5 years/60–75K miles.

To learn more about the guaranteed lifespan and the best way to maintain a spare tire, check the user manual. It will have all the necessary information on how to increase the life cycle, how fast you can go with the spare tire installed, and more. As for donuts, it’s not recommended to use them for more than 70 miles straight.

Does that mean you’ll have to throw the tire away after reaching the destination? Yes, you should do just that, even though there aren’t always strict distance limits on donuts. These tires have a dramatically lower lifespan due to the thin rubber, soft compound, and overall build quality. This is why donuts are so cheap compared to full-fledged, full-size spares.

The Most Common Signs of Emergency Tire Wear

It’s not uncommon for spare tires to “chill” in the trunk for many months, if not years. And, while this might sound a bit strange, they do degrade over time, even when not in use. So, make a habit of checking on them regularly to make sure they won’t let you down on the road. Tires are known to develop cracks. Plus, the rubber tends to get rather stiff, which is not a good thing.

When left untreated, that can lead to serious damage. This applies to both spare tires and donuts, by the way. A quick inspection now and then won’t take much time or effort, but you will always stay on top of things and be able to replace the emergency tire at the right time. Or have a mechanic check it during your regular maintenance visits.

How Much for a Donut and a Spare Tire?

As mentioned, temporary tires are quite affordable. Right now, you can get one for $50, with the more expensive units reaching $250–$300. Go to a local tire shop and ask for a donut. It might take some time to find a tire that fits your car perfectly, yet it will be worth the try. If not, there’s always the option of ordering it online. A quick note: donut tires can’t be repaired. No mechanic will do that, anyway, because it’s simply not worth it.

Full-size spare tires cost a lot more, but they last longer, so that makes it a worthy investment. And they cost the same as brand-new tires. If you want to always be prepared for an emergency, just buy five tires instead of four when you decide to get a replacement for the factory set. A full-size spare tire is a real deal, not just a temporary fix.

When Were Spare Tires Invented?

Did you know that the very first spare tire was introduced back in 1904? That’s right: it was pioneered by the Davies brothers—Morris and Walter. And the reason for that was the endless number of horseshoe nails left on the roads. These nails were piercing right through early-day rubber, and drivers had to spend hours fixing it. With spare tires, they only had to spend 15–30 minutes to replace a flat tire and get back on the road!

If one of the tires on your vehicle goes flat, a spare tire will keep you on the road. These full-sized tires behave exactly like OEM or aftermarket wheels. So, you won’t have a hard time driving the car. Plus, they have a very decent lifespan (up to 6 years). The same doesn’t apply to space savers, though: they can only be used for 70 miles max.

And you shouldn’t drive faster than 50mph. Check your map, make sure the closest tire shop isn’t too far away, and drive very slowly, as handling will be more challenging. A donut can never replace a full-fledged tire/wheel, but it will be a lifesaver during an emergency. Take care and drive safely!

Are Plastic Utensils Recyclable? How Do You Properly Dispose of Them?

13 Types of Trees in Maryland (With Pictures)