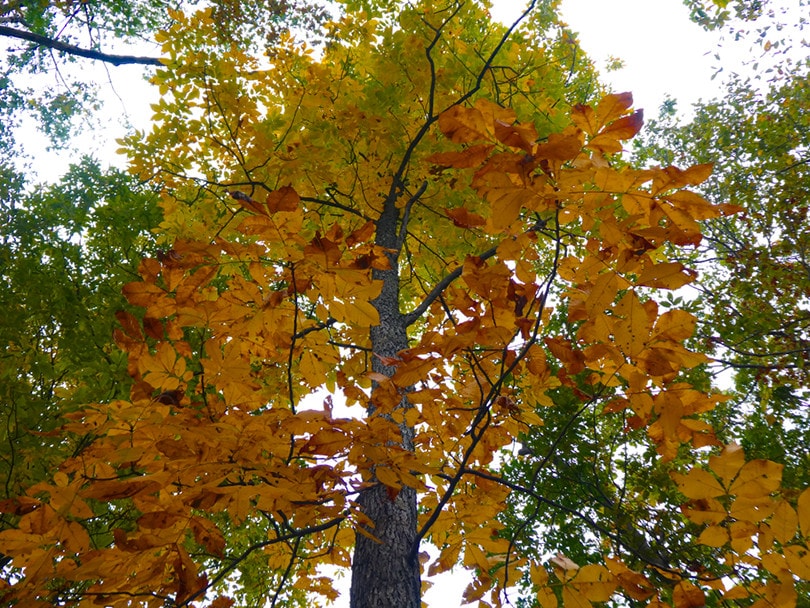 If you’re looking for a large tree with a dense canopy, wood for the timber sector, edible nuts of some types, or shade provision, the hickory tree is your best bet. The hickory trees belong to the walnut family and are native to the temperate areas of North America. One should know numerous things about this unique tree, but it’s most famous for its smoky effect on BBQs. Multiple identifiable traits make the hickory tree stand out among many deciduous trees. This article will cover the 12 types of hickory trees and other unique facts about this useful tree.

The 12 Types of Hickory Trees

There are 19 recognized hickory trees, 12 found in North America, two in Canada, and six in Asia. Below are the 12 most common types of hickory trees out there.

This type has a unique disheveled appearance because of the peeling gray bark. This tree grows very tall at 120 feet. offering great shape in urban settings. The Shagbark has a smooth bark but turns shaggy and rough at maturity. Its unique appearance makes it an ideal ornamental tree. The Shagbark produces edible nuts with a buttery taste and has long serrated leaves that turn golden yellow during fall.

The Shellbark is a slow-growing, large tree with slim trunks and has smooth, dark-gray bark,  with narrow grooves between the plates. The foliage comprises nine leaflets with thick twigs. Like the Shagbark, the leaves are serrated, turning golden brown in the fall. It’s referred to as the Kingnut, as it produces the largest nuts at 2.5 inches long and 1.5 inches wide.

The Pignut hickory is also known as the Smooth Bark hickory. The tree is unique for its massive round-shaped crown and thick, straight trunk. It also grows at the height of 60-80 feet, and unlike the others, has dark gray bark that does not peel away from its trunk. However, the Pignut develops scales and grooves when it matures. It is a famous ornamental tree used in wide woodlands and landscapes. Its nuts are pear-shaped but bitter for humans. However, the nuts are a pig favorite hence the name pignut.

Like the Shagbark hickory, this tree has the same appearance with its curled plates, shaggy look, and peeling bark. The main difference is that th Sputhern Shagback hickory has smaller nuts and grows tall at 60-100 feet with lancing branches. The leaves have serrated edges, oval in shape, and have a length of 12 inches. The tree produces five leaflets at the stem’s base.

The Mockernut hickory has the hardest nut to crack, growing at 60-80 feet. It normally has a round-shaped crown and is also referred to as the White hickory. The bark is dark gray with long fissures and deep furrows close together. The bark does not normally peel, but some Mockernut cultivators have peeling barks. The leaves are pale green, more rounded than oval, have five leaflets per stem, and are slightly serrated.

This hickory type is not only cultivated for shade but also for its tasty nuts. It is a massive tree standing at 60-130 feet, producing a dense canopy that could spread to 75 feet. Its brown nuts are enclosed in tan shells and have a buttery taste and waxy texture. The nuts are famous for their chewiness and rich taste. The bark does not peel, is reddish-brown, and has flat scales and deep fissures. The leaves are the pointiest of all species, and the foliage is fern-like in structure, with every stem composed of 15 leaflets at the base.

This type is easily distinguishable due to its inedible, bitter nuts and irregularly shaped crown. The fissures follow a diamond pattern, and the bark hardly peels. The bark becomes dark gray as the tree matures and develops gray-brown ridges and deep fissures. The twigs are slim and light green, and it grows to up to 155 ft. The 5-8 broad leaflets per stem are light green in spring and summer, turning golden yellow during fall.

The Scrub hickory gets its scientific name as it is endemic in Florida and native to the Southeastern USA. This type is more of a shrub than a tree, reaching a maximum height of 16 feet. However, the tree could grow as tall as 80 feet when in the wild. Given its size, the leaves are quite long, at 12 inches. The tree produces small edible nuts and has seven leaflets at the base. The bark is slender and peels with long fissures and deep ridges.

This slow-growing tree reaches a height of 80 feet and has light gray bark with shallow, intersecting furrows. It is slightly fissured and ridged with five-pointed leaflets. The leaves are smoothing, pinnate and glossy with the nuts like the Red hickory in shape and size though edible.

The Red hickory grows in dry and sandy soils, reaching a height of 100 feet. It produces small and round nuts that are sweet and sometimes bitter. The Red hickory has one of the most attractive barks with flat and ash gray ridges. Closely gapped and thin fissures separate its ridges. It has smooth and glossy leaves with finely jagged edges. Seven leaflets sprout from each stem.

This is one of the rarest types of native hickory trees. It is slow-growing but reaches a height of 100 feet and is found scattered in the Southern US states. Its bark is peeling in long plates and brownish-gray and consists of deep ridges. The leaves are long, pointy, and serrated on the edges. It has a bright green color and a silvery underside with nuts similar to nutmegs. The nuts are tasty and buttery.

The Black hickory gets its name because of its dark gray back with diamond pattern ridges. The bark is similar to the Shagbarks but smoother. The leaves are long, oval-shaped, and slightly serrated on the edges. The Black hickory has three pairs of lancing leaflets sprouting from the stem. It is bright green with paler green undersides. Like the pignuts, the nuts are bitter, providing food for wild animals.

There is more to hickory species than just the many uses its wood has and its dense shade. Below are some exciting hickory tree facts that you should keep in mind.

We hope this list of hickory trees gave you guidance about which one you would like to plant in your yard, or help you identify ones that are already growing around your neighborhood. Hickory trees are fantastic for shade, decoration, and, of course, the nuts they bear! You will be pleased with any hickory tree you decide to plant.

10 Most Expensive Homes in Missouri (With Pictures)

Are you considering moving to the state of Missouri? Or perhaps you’re just curious about how expensive homes can get in the beautiful “Show Me”

How to Install Driveway Pavers in 12 Steps

White Stair Risers vs. Wood: Which Should I Choose?