How to Get Rid of Stink Bugs in Your Garden: 3 Methods That Work 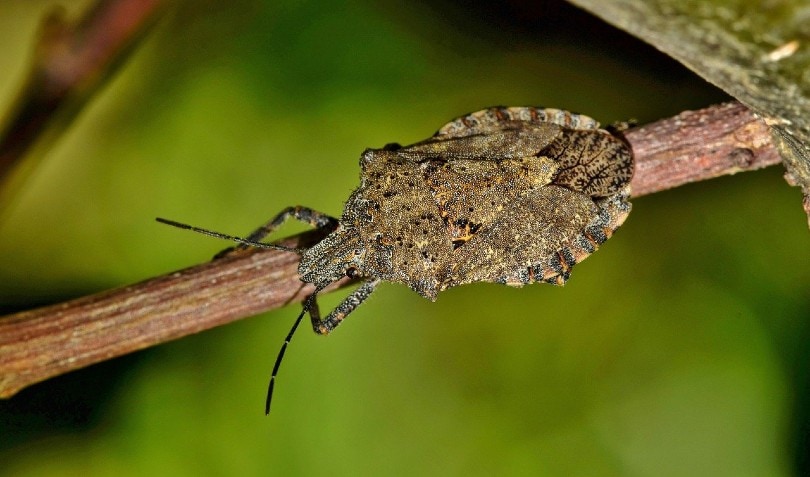 Aptly named the “stink bug”, this is an insect species notoriously known to emit a foul odor as a self-defense mechanism. These insects have different body shapes and are herbivorous, feeding on vines, shrubs, cultivated crops, and ornamental trees. If their population is unchecked, they can easily deprive you of home-grown foods.

It’s bad enough when they show up in your house and stink the atmosphere to the high heavens. However, the real damage begins when they start munching away on your prized tomato plants.

These bugs are a real nuisance to farmers in the United States because they are active throughout the growing season, and in the absence of predators, infestations can rapidly escalate. So, it is pertinent that you nip their infestation in the bud as soon as you notice their smelly presence. Sure, old traditional methods such as hand picking and diatomaceous earth still work. However, there are other effective methods of getting rid of stink bugs from your garden.

In this article, we will highlight three tried-and-true methods of getting rid of these foul-smelling insects.

Before attempting to eradicate stink bugs from your garden, you first have to identify the correct insect. Otherwise, you could end up getting rid of eco-friendly insects with beneficial characteristics.

Scientifically known as Halyomorpha halys, over 200 species of these insects are found in the US and were first introduced from East Asia in the 1990s. As their name suggests, these insects emit a horrible smell, which is hard to miss. When provoked, they release this odor to deter predators from harming them. This is perhaps the easiest way to identify them. However, you can also identify them from their physical appearance.

Stink Bugs have large, shield-shaped bodies, though sometimes they can be oval. They can grow to about ¾ inches long, and mature stink bugs can be seen during spring and late summer.

While many stink bug varieties exist, the most common stink bug in the United States is the Brown Marmorated Stink bug. Only one known stink bug species is green in color. The highly invasive bug can be distinguished from the native species by the white bands located along the legs, abdomen, antennae, and back edges. Stink bugs may look like normal garden squash bugs, save for their broader bodies.

The 3 Main Methods of Getting Rid of Stink Bugs

If you have confirmed that there is a stink bug infestation in your garden, and the bugs are harming your plants, the next logical step is to get rid of them. Unfortunately, most pesticides rarely work on these pesky pests. So, what does?

Below we will highlight three awesome DIY methods of treating a stink bug invasion. If unsure about how the traps or pesticides work, you may want to consider professional help.

According to a study from Virginia Tech, homemade stink bug traps can be more effective than professional traps to get rid of pesky bugs. However, this method will depend on the severity and scale of your stink bug infection. Trapping and baiting mitigation methods are preferred because they are pesticide free. However, they are only effective on smaller-scale infestations.

Below are some of the trap methods:

The DIY soap trap is perhaps the easiest and least involved method of controlling stink bug invasion. All you need is a cup of tap water, a bowl, and soap powder.

A towel trap is another simple and effective method of eradicating stink bugs. The tools required for this method include a towel, cup of water, and soap powder.

Sticky traps are also an effective method of trapping not only stink bugs, but also fruit flies, gnats, and fungus gnats. You can use sticky traps close to infected and affected plants to catch, kill, and get rid of the bugs. There are a variety of sticky traps that can be purchased from any agricultural vet. Your choice will depend on the severity of the invasion as well as your budget.

If you have adequate space in your garden, consider planting a decoy crop to entice the insects away from your desired plants. Once the stink bugs flock to the tap crops, pull them out and dump them in a sealable garbage bag together with the pesky bugs.

You could leave the garbage bag in the sun for a few days so that the bugs are dehydrated to death or simply empty the contents in a landfill or burn pile. Plants that make excellent stink bug trap crops include mustard, sunflower, sweet corn, okra, and amaranth.

Although a tedious method, you can also handpick stink bugs off your plants as soon as you notice their presence. However, instead of crushing them as most people would be inclined to do, drop them in a container of soapy water to kill them. Containers such as yogurt cups and takeout containers should work well.

Hand-picking stink bugs not only removes the visible bugs from your garden, but also prevents them from reproducing. So, the earlier you pick them out and dispose of them, the fewer stink bugs you will likely see in the future.

An additional natural method of securing your house perimeter is by spraying neem oil. It is considered a natural bug repellant option that discourages stink bugs from eating the plants and laying eggs on the foliage.

In addition, neem oil can disrupt the stink bug’s feeding and mating cycle. This is because, like lavender and other essential oils, the oil produces an odor that stinks bugs are highly averse to. Therefore, you can spray it around the perimeter to give them a taste of their own medicine, so to speak. The neem oil spray will deter stink bugs from sneaking into your garden or home.

You can either buy a ready-made neem oil solution from a local store or make one yourself. If you opt for the DIY option, mix 2 tablespoons of neem with 1 liter of water. You could use dish soap as an emulsifier. Bear in mind that neem oil itself has a nutty odor, so you might want to mix it outdoors.

If you are dealing with a full-scale infestation of stink bugs in your garden, you may need to employ some drastic measures. This can be done using chemicals as perimeter barriers against the bugs.

Perimeter sprays are made with either powder or liquid pesticides and often by trained professionals. However, these pesticides are readily available on the market and one can perform the treatment on their own, thus saving money.

When using a typical insecticide sprayer, consider treating the perimeter of your home or garden every 30 days and throughout all seasons. Pay special attention to doors and windows, especially around any crevices or cracks in your foundation or roof. This is because stink bug entry points are small and hard to see.

The most effective and readily available pesticides for stink bug eradication are fenpropathrin and clothianidin. These two pesticides are effective in stinkbug management with minimal effects on humans and the environment.

Below are some tips and tricks for using fenpropathrin and clothianidin to get rid of stink bugs from your garden.

Using chemical pesticides to control stink bug infestation is not recommended in most cases. The long-term effects of broad-spectrum pesticides can be severe and may cause more problems than they solve. Therefore, when using any type of pesticide, keep your pets and children away until the poison has dried out. Also, do not consume any garden foods before the poison has completely washed away.

Granted, stink bugs are not the worst of garden pests. While they may not cause physical harm to you, they unleash a noxious odor and can destroy crops on an unprecedented scale. Luckily, getting rid of them can be as easy as mixing soap with water.

In case the stink bug infestation is not widespread, you can employ natural methods such as trapping and baiting to get rid of the pesky pests organically.

If the situation gets out of hand, a pest control professional can identify the hiding spots and get rid of the stink bugs before they wreak havoc on your garden.

Unless you’ve changed all your vehicle’s fluids before, you probably haven’t given much thought to the type of transmission fluid in there. But it’s an

How Much Is Car Insurance in Arkansas in 2022?

14 DIY Bluebird House Plans You Can Build Today (With Pictures)