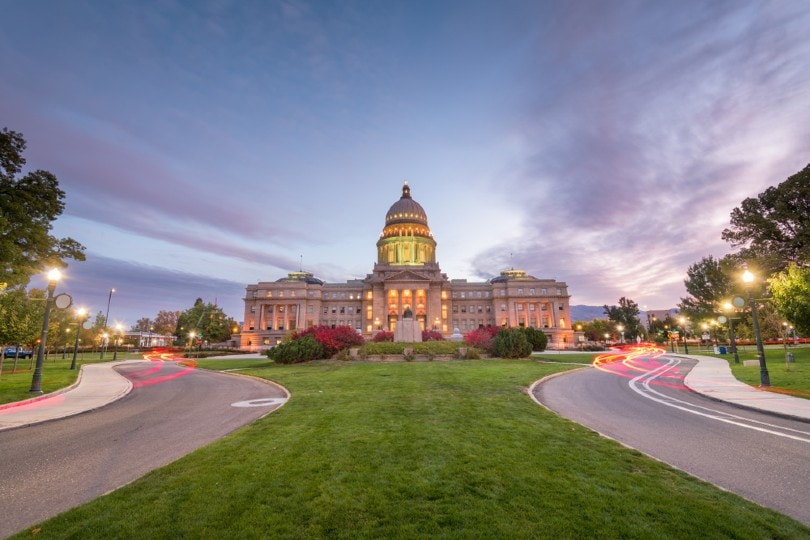 Below, we have listed the ten safest cities in the state, including violent crime rates and property crime rates. So, whether you’re looking to move to The Gem State or want somewhere safe to visit for a vacation, consider one of these cities.

The 10 Safest Cities In Idaho: A Quick Look

The city is a tourist destination but also makes its money from forest products as well as some light manufacturing. The city is surrounded by mountains and is a multi-award-winning city. The median family income in Sandpoint is $47,875 and nearly 20% of the population live on or below the poverty line.

One of Idaho’s largest cities is also one of its safest. Meridian has a population of 111,196 and is the state’s second-largest city. It is the fastest growing city in the state and one of the fastest in the whole of the U.S. Even though large cities tend to have higher crime rates, Meridian has a violent crime rate of 159 and a property crime rate of just 1,068, both of which are below the national and state averages. 4 homicides were recorded in 2019 and the bulk of the rest of the violent crimes reported were aggravated assaults although 48 rapes were also committed in the year.

The town was only established in 1891 and incorporated in 1903. Part of the reason for the city’s low crime rates may be the existence of the Idaho State Police headquarters and the state police academy where all officers across the state must attend. The median family income for residents is $57,077 and just 5.6% of the population live below the poverty line.

Middleton, a part of the Boise Metropolitan Area, is a much smaller city with 8,395 residents and it has a violent crime rate of 131 per 100,000 and a property crime rate equivalent to 893 per 100,000. No homicides were committed in Middleton in 2009 and it is the 8th safest city in Idaho, itself considered a safe state to live in.

Middleton was moved to its current location in 1880 after the original town flooded. It became a city in 1910. Visitors can tour the Sunnyslope Wine Trail, Middleton Place Park, and the Macpaca Farms which is a working alpaca farm and has its own produce shop. The median family income for Middleton is $34,734 and 10.4% of the population live in poverty.

Lewiston is the ninth-largest city in the state despite only having a population of 32,931 people. 128 violent crimes are committed per 100,000 people and it has a property crime rate of 2,900, which is the highest on our list of safest cities in Idaho. The city’s 42 violent crimes included 25 aggravated assaults, 2 robberies, and 15 rapes.

Idaho’s only seaport, Lewiston, was founded in 1861 following a gold rush that had started to the northeast of the town. It became a city in 1863 and its main outputs are agriculture, paper, and timber. It is also a prominent producer of firearms. Lewiston has an undergraduate college, is located near Granite Dam, and it has an evolving economy that is helping it survive and thrive. The median income for families in Lewiston is $45,410 and 12% of the population live on or below the poverty line.

Preston is a small city with just 5,533 population but it is also the 6th safest city in which to live in Idaho thanks to the fact that it has violent crime and property crime rates of 90 and 922 respectively. There were only 5 violent crimes recorded in 2019, but these were made up of one murder and four rapes. There were 51 reports of property crime.

Preston was established in 1880, although a settlement already existed on the site.  The city plays host to an annual rodeo and a county parade as well as the Idaho Festival of Lights. The city is also recognizable because many of the parts of the film Napoleon Dynamite were filmed in the city. According to the most recent census, the median family income in Preston is $39,537. Just 6.7% of the population lives in poverty.

The city was founded in the 1800s and despite initially being named Westwood for the town founder Charles Wesley Wood, the town was informed that there was already another town in the territory with the same name. The name Rathdrum is taken from the town in Ireland.

Rupert was formed in 1906 when the Minidoka Dam was complete and it became one of the first cities, globally, to have streets lit by electric lights. Its population has steadily increased since 1920. Although the city is safe, the median family income of $29,423 is low and 22% of the population does live below the poverty line.

Fruitland is a small city with a population of 5,472. It has a very low violent crime rate of 55 per 100,000 and a property crime rate of 658. Only 3 violent crimes were reported: a rape, a robbery, and an aggravated assault. Its crime rates are substantially lower than those of the state and the nation as a whole.

Fruitland is nicknamed the Big Apple Of Idaho because it is surrounded by apple trees: also the reason for the city’s name. Most of the city’s economy also comes from these apple orchards. Approximately 12% of the population live in poverty.

Moscow is a modest-sized city with a population of 26,018 people. Only 7 violent crimes (a rape and six aggravated assaults) were reported in the area in 2019, giving a violent crime rate of just 27. Property crime rates are higher with a rate of 1,326 per 100,000 people. This means that Moscow is the 2nd safest city in Idaho.

The University of Idaho is in Moscow and is the city’s main employer, but there is still a lot of agricultural and trading economies in the area. The city was established in 1871 as Paradise Valley but was changed to Moscow in 1875. There are various contradictory stories related to the naming of the city, but the simplest is that the name was chosen by a Russian immigrant trader that came from Moscow and named it after his hometown. It was especially popular with pig farmers, earning it the nickname “Hog Heaven”. The city has a large network of municipal parks to enjoy.

Rexburg has nearly 30,000 residents and is another locale that serves primarily as a university town, in this case for the Brigham Young University-Idaho. This is a private institution by the LDS Church, which means that its students are listed as population, but any minor crimes are likely dealt with on-site. However, Rexburg has a violent crime rate of just 21 per 100,000 following 6 reports of aggravated assault. It also has a property crime rate of 416 per 100,000, which is the second-lowest in the state after Hailey. This combination makes Rexburg the safest city in Idaho.

Rexburg was incorporated in 1883 and got its name from the city founder, Thomas Edwin Ricks. Recently, the city has been in the news for the disappearance of teenagers Tylee Ryan and J. J. Vallow. The two went missing in 2019, were found in 2020, and their mother and stepfather were charged with the first-degree murders of the two.

How To Stay Safe In Idaho

Idaho is a safe state with violent crime and property crime below the average, and the ten cities above are especially safe when looking at FBI crime statistics. To further ensure you have a safe stay while traveling in the state, follow these guidelines.

Idaho is a safe state with low violent and property crime rates, and the ten cities listed above are especially safe as they are the ten safest cities in Idaho. They can provide the ideal spot for a vacation or for your next family move.

Spray painting plastic can be an arduous task as most spray paints don’t adhere well to common plastics, which means they quickly chip away and

How to Replace Ceiling Tiles in 3 Steps (with Pictures)

How Much Can a Toyota Highlander Tow?