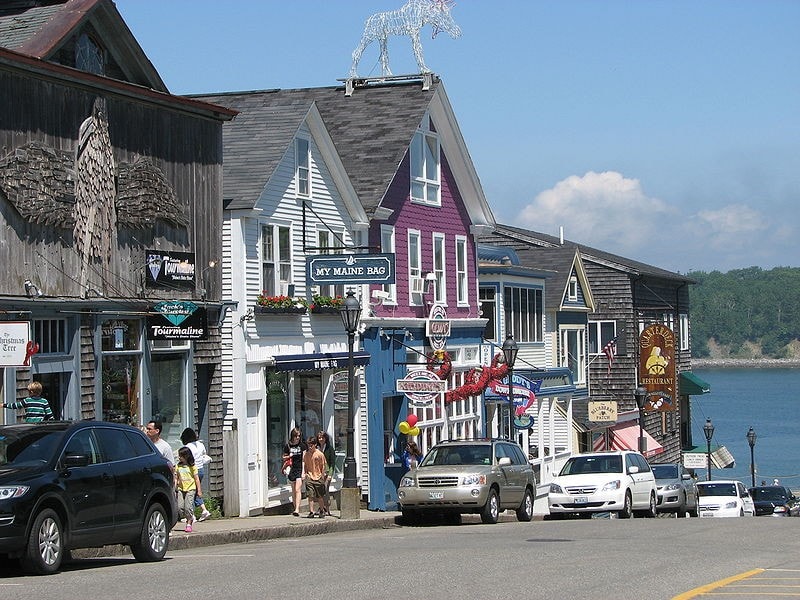 If you are moving to Maine or already a resident of the state, you are likely wondering how safe different parts of the state are. Overall, Maine is a relatively safe state, largely because of its affluent and rural communities.

Still, there is some crime in Maine, and certain cities are safer than others. To learn about the 10 safest cities in Maine, keep reading. We also offer tips for staying safe in Maine in the end.

The 10 Safest Cities in Maine: A Quick Look

Cumberland continues to be the top safest city in Maine. Its crime rate is 228.8 times lower than the national average. Plus, the crime rate keeps falling over the years, showing that Cumberland is becoming an even safer area to live in.

The vast majority of crimes in Cumberland are property-related. In contrast, there are very few violent crimes, and the entire city only has three registered sex offenders, further showing how safe the city is. Of the property crimes, most are thefts. The rest of the crimes are primarily auto thefts and burglaries.

Luckily for Cumberland residents, if you invest in good home protection, you don’t have as much to worry about when it comes to crime in Cumberland. As a result, this is the safest city to live in Maine in 2022.

The second safest city in Maine is Sabattus. It is in the 88th percentile in terms of safety compared to the entire nation. This means that Sabattus is safer than 88% of the other cities in the nation, whereas 12% of other cities are safer.

The safest place to live within the city is in the north neighborhoods. There, your chances of becoming a victim are only 1 in 110. However, you are more likely to become a victim of a crime in the west neighborhoods. The chances there are 1 in 62.

Whenever crimes do happen, most of them are property-related. There aren’t many violent crimes, but there are slightly more violent crimes than in Cumberland. Still, the city is incredibly safe, especially in the north area.

Cape Elizabeth is another super safe city in Maine with a low violent crime rate of just 7.4, making it lower than our top pick. At the same time, it has a much higher property crime rate, which is at 18.2. This explains why Cape Elizabeth is not our top city.

If you are most concerned about violent crimes, though, that crime rate is low, making Cape Elizabeth is hands down one of the best cities you can move to. It truly is an incredibly safe city with beautiful views and a comfortable atmosphere.

Because of its high property crime rate, it’s important to put your best foot forward to protect your home, vehicles, and other properties. Make sure to invest in good security measures to help deter thieves and be cautious when going out on the town.

In Hampden, a crime occurs only once every four days and three hours on average. The safest place to live in the entire city is in the southeast part. However, no matter where you live, you are still living in one of the safest cities in the nation, not just in Maine.

Due to the city’s design, you’re most likely to be a victim of a crime around the parks. Even though the city tries to protect the parks, there’s a higher crime rate, primarily because many people frequent here, but very few live in the area.

Here we have another small city in Maine, but it has slightly higher crime rates than the cities we’ve looked at above. The violent crime rate in this city is at 11.4. This is still much lower than the national average.

Something else to know about South Berwick is that the crime rates for the city continue to fall. In fact, both violent crime and property crime have been decreasing by dramatic percentages ever since 2015.

This might mean that South Berwick is a good place to move to if you are looking for a city that continues to improve on its crime rate, which is already low. Something else to note is that South Berwick has one of the lowest numbers of sex offenders at three registered offenders.

It is important to note that both crime rates have been decreasing in Belfast over the years. This shows that the community is at least making efforts to decrease this high property crime rate. Not to mention, the city has a very low violent crime rate, which is a major feat.

Kennebunk has been one of the safest cities in Maine for many years. Although it hasn’t quite topped the list before, it has consistently been a safe city and remains one. On average, a single crime occurs only once every two days and 10 hours in this city.

In addition to being very safe, Kennebunk is often ranked as one of the most livable cities in this state, meaning that living in Kennebunk is relatively affordable and convenient for most people.

It can be predicted that the reason Kennebunk is so safe is that it is a more affluent community. With the average household income being well over the average nation’s income, the city is relatively well off, resulting in more safety measures against violent crimes.

If you are a fan of cities, you might have been disappointed that nearly all the options on our list so far are relatively small communities. Although Gorham is far from being a large metropolis, it is notably larger than the other cities on this list, and it is still pretty safe.

Gorham only has a violent crime rate of 9.4. The crime rates are lower than the national average, which means you only have a one in 212 chance of being the victim of any type of crime in the city.

If you want to move to the safest part of the city, the southwest part is the safest. In comparison, the west neighborhoods tend to be the most dangerous. So, select your homes and shopping locations accordingly.

Finally, the last city on our list is Bar Harbor, Maine. Bar Harbor is a very small community of just about 5,500. It has relatively high violent crime rates and property crime rates in comparison to the other Maine cities on this list, which is why it is number 10. However, both rates are much lower than US averages.

The Bar Harbor violent crime rate is just at 10, with the US average being 22.7. As for the property crime, the Bar Harbor rate is 24.1. These rates show that far harbor is more dangerous than the other cities on this list, but it is far from being a super dangerous city to live in.

The safest place to live in Bar Harbor is in the northern area. In contrast, most crimes happen in the southern parts of the town.

How to Stay Safe in Maine

As we saw above, most of the cities in Maine do not have high violent crime rates. In fact, there are only, on average, 13 crimes for every 1,000 residents in the entire state. Not to mention, crime rates for the entire state have been falling by huge percentages, as much as 50%, over the last few years.

As a result, it’s more important to protect your property than yourself when you consider Maine crime rate statistics. In other words, since you are more likely to be a victim of a property crime in Maine, you want to have resources and tools to deter thieves or catch them in the act.

For example, having security around your home decreases your chance of being a victim of property crime in Maine by nearly 300%. This is a whopping number that just proves how important security measures are for defending against Maine property crime.

Just by investing in security, taking the time to make sure all doors and windows are locked, and other similar measures can decrease your chances of being a victim of a Maine crime dramatically.

If you are moving to Maine, know that the state is relatively safe, but the ten cities mentioned above are the safest. You’re most likely to be victims of property crime than violent crime, which is even better news.

To protect yourself from as many crime types as possible, invest in security measures and be smart whenever you leave your house. Just by doing a few things to protect yourself and your property, you are decreasing the chances of being a victim of crime dramatically.

Generators will keep the lights going in a power outage, let you use electric tools on a remote job site, and add some comforts from