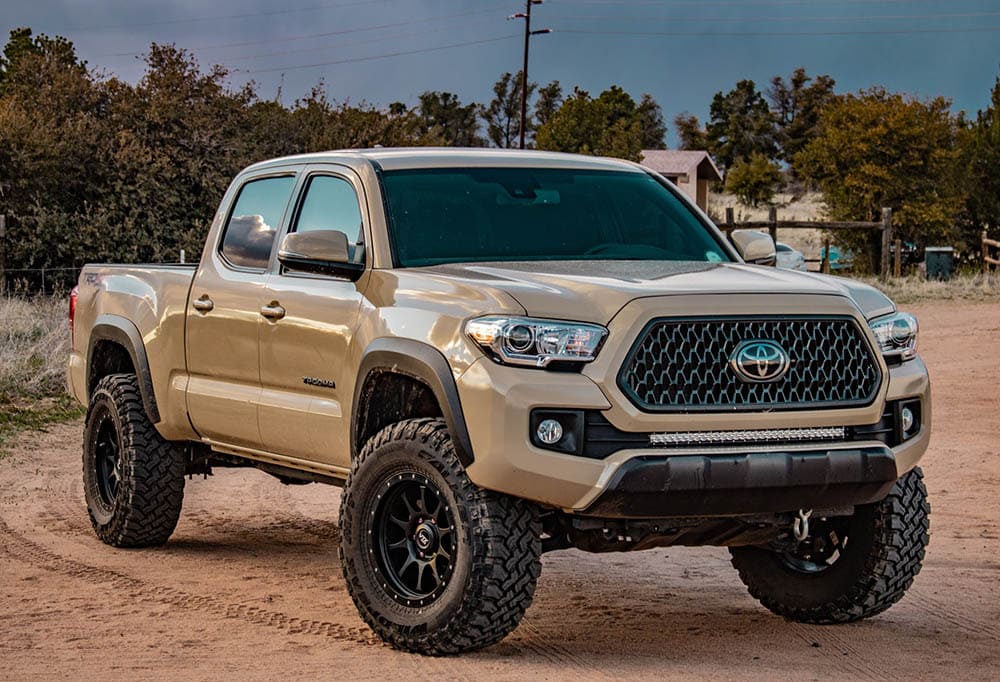 The Toyota brand has been around for nearly a century. You can hardly drive a block before you see one, they’ve become a well-loved and ubiquitous car brand. But how much do you really know about this successful company? Let’s take a look at the most interesting statistics and facts about this multi-billion-dollar name.

An Old Company With Humble Beginnings

Toyota was founded by Toyoda Kiichiro in 1933 as a subsidiary of the then-parent company Toyoda Automatic Loom Works, Ltd. The company would eventually morph into Toyota Industries Corporation as it grew from a late 19th-century industrial loom company into an innovative automotive corporation. This transformation was gradual, but the Toyoda family was highly interested, and invested, in the newest industrial technologies of the day.

They were the first to make an automatic loom in Japan (Toyota Industries) to great success. The willingness to invent and invest in new technology is what spurned the company to eventually break into the burgeoning automotive industry.

Toyota’s first public passenger car was the Model AA Sedan. The company began working on prototypes in 1935 which accumulated in the release of the Model AA in 1936. The name is derived from the prototype naming which began as A1 and was named in succession with each new idea. The name, AA, represents the first successful prototype that became a production car. Obviously, their naming scheme would become more market-friendly as time went on but the original Model AA is a reminder of the rough early roots of the original Toyotas.

3. Toyota is the largest car company in the world.

Toyota has long since forsaken its humble origins as a local industrial company from 19th century Japan and has become a vaunted automotive company. Not only are Toyotas an internationally recognized brand, they recently eclipsed General Motors to become the largest car company in the world. This title is derived both from average annual revenue as well as the number of units produced.

Currently, Toyota is the largest company by volume and the second-largest by revenue. The only company to surpass Toyota in revenue in recent years is Volkswagen.

Each year Toyota produces anywhere from 7.5 million vehicles in an average year to upwards of 10 million vehicles during a busy year. These numbers are the highest for any car company on Earth. In 2008, Toyota passed General Motors as the largest car company in the world when their production numbers rose higher than the American brand for the first time ever. They have not relinquished their hold on the top spot since then.

The millions of vehicles manufactured by Toyota are distributed to countries all around the world but their primary markets remain in Japan and the United States.

Despite only making on average 7.5 million units in a year, Toyota actually sells 9.5 million units. That is due to a backlog of vehicles that sit on the lot or are sold in bulk orders. This shows that Toyota sells very well year over year and that their inventory does not sit for long before being sold. That is because Toyotas are always in high demand due to their affordability, availability, and durability.

A total of 9.5 million cars is a large number of sales and it has propelled Toyota’s average earnings to stratospheric levels. Thanks to strong sales year over year and continued growth Toyota has quickly risen to be one of the top-grossing car manufacturers on earth.

Those millions of cars translate to just under $250 billion per year in revenue. That represents a massive share of the market. For comparison, General Motors, the company that Toyota dethroned in 2008 as the world’s largest carmaker, rakes in about $120 billion per year, which is half that of Toyota. The discrepancy is due in large part to Toyota’s global reach. They sell cars all over the world and have massive markets in North America, Asia, and Africa.

That extended reach has propelled Toyota past their peers into a category all their own in terms of revenue.

7. The Japanese car company started selling cars in the USA in 1957.

It took Toyota two decades to finally make it to America. When they first started marketing their cars in the United States they were poorly received. Even back then, Americans derided the cars’ diminutive size and lack of horsepower. Specs that were more than good enough in Japan were not going to cut it in the United States. Americans wanted bigger, faster, and more powerful cars. So, Toyota obliged.

After touring rival plants in Detroit run by Ford and General Motors Toyota began to make cars more suited for an American market. After their initial Toyopet sedan failed to catch the eye of American drivers they retooled and launched a military-inspired Toyota Land Cruiser which was much more popular. Toyota later completely scrapped the Toyopet and redesigned it as the Toyota Corona with a Western audience in mind.

8. Today, Toyota has four of the top 10 most popular cars in America.

9. The Toyota Corolla is the best-selling Toyota of all time.

Despite not being featured on the list of the current most popular cars in the United States, the most popular vehicle ever sold by Toyota is the Toyota Corolla. The Corolla has sold over 40 million units over 11 generations of designs. The car sold extremely well in both Japan and the United States and continues to be a staple of the Toyota lineup of cars year in and year out. The Camry, Corolla’s larger sibling, is more popular in the United States but has the same bones as the best-selling car. No matter where you travel, there is sure to be a Toyota Corolla nearby.

Gaining and Maintaining a Global Impact

10. Toyota helped start the green car revolution with the Prius.

Toyota was one of the first companies to launch a green car that was a global success. The Toyota Prius was designed to be affordable and get top-notch gas mileage. It is the highest-rated gasoline car ever in terms of overall gas mileage. Prius continues to get top marks for resale value, durability, longevity, and affordability.

The hybrid car revolution and craze that followed can be directly linked to the popularity of the Toyota Prius. It was one of the very first production cars to feature a hybrid chassis that married an electric motor and gasoline engine which is what produces the out-of-this-world gas mileage rating (up to 45 mpg).

11. The Toyota Supra is the latest car to hit the circuit for Toyota Racing.

Toyota has a long history of competing in popular motorsports and they are one of only three manufacturers to compete in America’s top-flight NASCAR full time. Recently, Toyota pivoted away from using the Camry as the base for their most successful race cars and have launched the Toyota Supra onto the track. The Toyota Supra and Toyota Racing Development compete in professional motorsports competitions all around the globe.

Here are some Toyota Supra facts you should know. The new Supra is a relaunch of a popular model from years ago that was once called the Toyota Celica. The Toyota Supra is now the base of Toyota’s successful NASCAR program but is also available to the public as a popular sports car. Other Toyota Supra facts include the fact that the Supra was the first car to feature a built-in navigation system and the original production model of the Toyota Supra relaunch was sold at auction for $2 million reminding everyone about the popularity that this model still commands.

12. There was a war named after Toyota: “The Great Toyota War.”

Toyota’s global reach and influence are possibly best demonstrated by the fact that there is a war named after the car company. A 1980s regional conflict between Libya and Sudan saw extensive use of Toyota trucks as vehicles of war. The number of Toyotas present on the battlefield coupled with their rugged efficiency led to the battles between Libya and Sudan being named the Toyota War or the Great Toyota War.

The Toyotas were used to ferry troops across the flat expanses of desert in northern Africa and in some cases were even modified to hold weapons and ballistic mounts. The durability and reliability of the Toyota trucks on display made them a popular choice for explorers and travelers around the world.

Yes. Toyotas remain one of the most affordable cars on the market. Many Toyotas can be purchased for less than $30,000. (Edmunds) The number of Toyotas on the market means that finding an affordable used model in good condition is also easy to do.

Yes. Toyotas are extremely reliable. As mentioned in the Toyota Prius facts, cars such as the Prius and the Corolla regularly earn top marks for being the most reliable cars in their class. (Consumer Report) Toyotas are easy to fix, rarely break down, and can easily rack up large numbers of standard use miles for many years.

Is Toyota a public company?

Yes. Toyota is a publicly-traded company that trades on the New York Stock Exchange. Toyota’s shares regularly trade between $150 and $200 and have been steadily on the rise in the past ten years. (Investopedia) The continuing success of Toyota has made it a popular buy for investors.

Where is Toyota headquartered?

Toyota’s global headquarters are actually located in a city named Toyota. The city is in Japan and is outside of the larger city of Nagoya. Toyota’s major infrastructure including offices and primary manufacturing plants are all located in Toyota, Japan. (Toyota)

How many employees does Toyota have?

Toyota currently employs roughly 366,000 employees all around the world. (Statista) That makes Toyota one of the largest manufacturing companies in terms of people employed as well as being the largest car manufacturer and top two for revenue worldwide. Toyota employees consist of salespeople, office workers, manufacturers, and mechanics that span from Japan to the United States and more.

•What Is a Declaration Page for Homeowners Insurance?

There you have it, a dozen amazing facts about Toyota. Toyota is an old company with a prestigious history and a knack for being the top in their field at almost everything they do. Whether it is conquering global markets, innovating new ideas, or taking the checkered flag on the racetrack Toyota always seems to be in a preeminent position. Be sure to clue into the amazing Toyota Prius facts and facts about the newest Toyota Supra to keep in touch with what is happening with the popular global brand.

Toyota has long since grown and evolved out of its roots as an industrial loom company in Tokyo to become one of the most recognizable and respected brands in modern times. It is a fascinating company with a ton of amazing facts to behold.

How Many Watts Does a Box Fan Use? Do They Consume Lots of Power?